“Ok, so the first one will be out in a few minutes.”

“Wow! I didn’t even realise you had cut me open already!”

“Can you feel any tugging or pain?”

“Are they ok? Why can’t I see my daughter? What’s happening?”

The goal was to get to 34 weeks gestation. My first aim was to get to 24 weeks and then my babies would be viable. 29 weeks so their chance of surviving reaches 90%. 30 weeks so their lungs would have developed more. I also just wanted to reach December and then, if possible, get past Christmas Day!

I was booked in for my c-section on the 3rd January 2018, however due to a bad chest infection that I couldn’t shift it was brought forward to 27th December 2017. I couldn’t lie down in the end, as I couldn’t breathe, and was sleeping upright on the sofa, propped up with pillows!

So now I had a date, I had to get everything ready; but first was Christmas, and with presents still to get I headed out to the shops. Still squeezing into the driving seat and slowly waddling around everywhere was a struggle, but I knew I had to keep active – for my health and the health of my babies. I had finished work on 10th November, on medical orders, as I had to rest before I ended up on full bed rest in hospital – which I didn’t want at all.

Work were amazing with me and initially I wanted to finish work just a few days before Christmas! But I knew I had to listen to the doctors and my body.

A few days before Christmas I had my bloods taken to test I was ok and also to order extra blood, should I need a transfusion. I then had a steroid injection in my right bum cheek! Wow, that didn’t half sting!! I had heard that it hurt so I was a bit nervous, however, though it stung, the pain quickly goes away – though it didn’t stop my eyes watering! On Boxing Day I went back to hospital for my second steroid injection, this time in my left bum cheek, and that hurt a little bit more but it was all over nice and quickly. So don’t worry if you need to have this, as it really isn’t that bad; it just stings a bit. The steroid injections were to help my babies lungs, as they were going to be 7 weeks early, their lungs wouldn’t be fully developed, so this helps them.

At 10pm Boxing Day night I had my first tablet to get me ready for surgery. Now it was getting more real!! Then just before midnight I had my last drink and feast – of cakes!! Haha. I couldn’t resist a raspberry turnover! 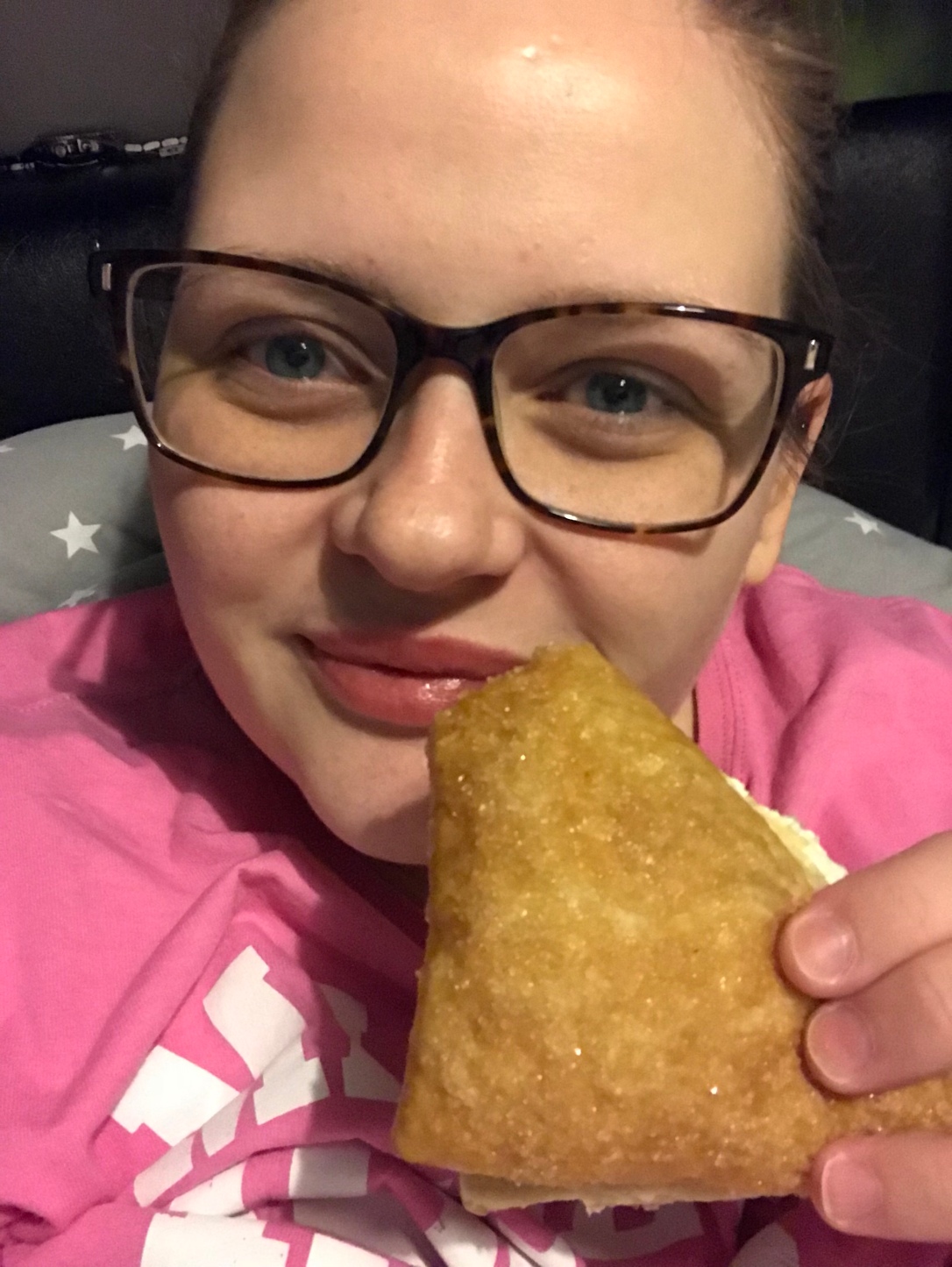 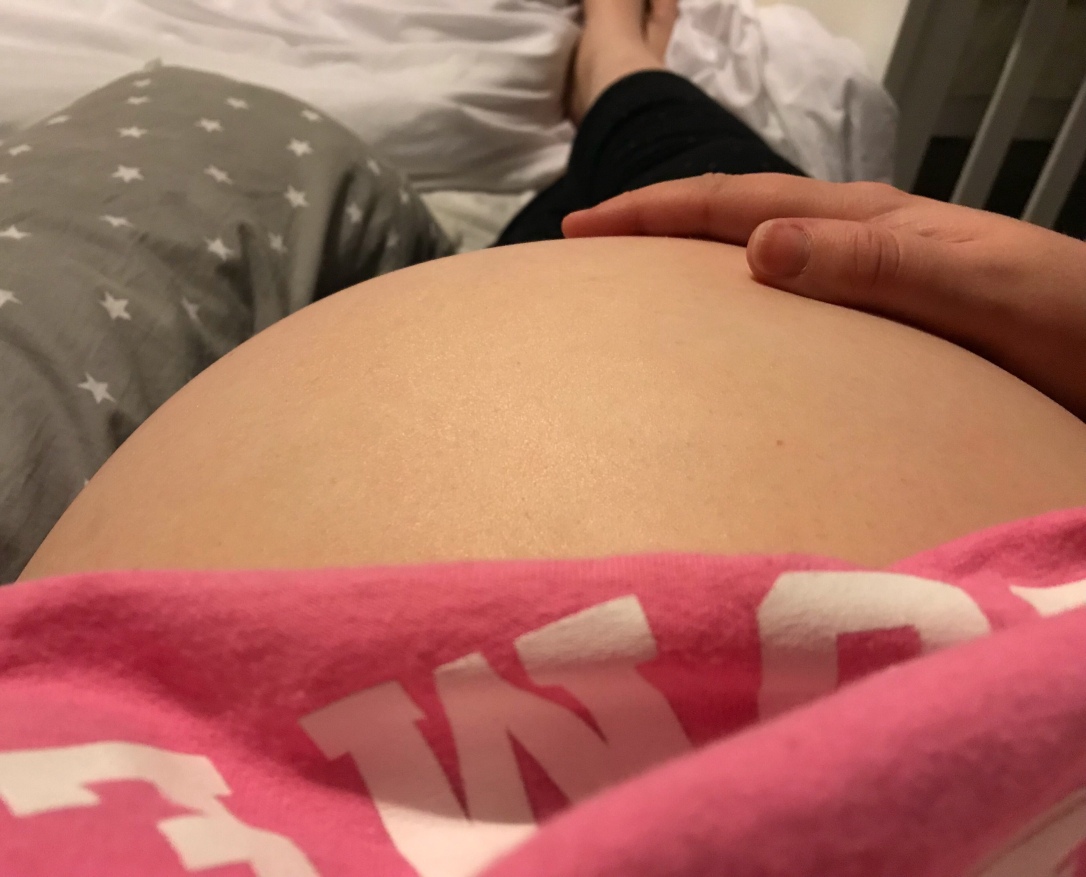 I wasn’t allowed to eat or drink anything, not even water until after my delivery so I made sure I had a little treat beforehand.

At 6am I took my second tablet, showered and dressed and headed to the hospital with all our bags, ready to meet my babies! I was so excited, but so nervous!! I couldn’t believe the day had finally arrived. 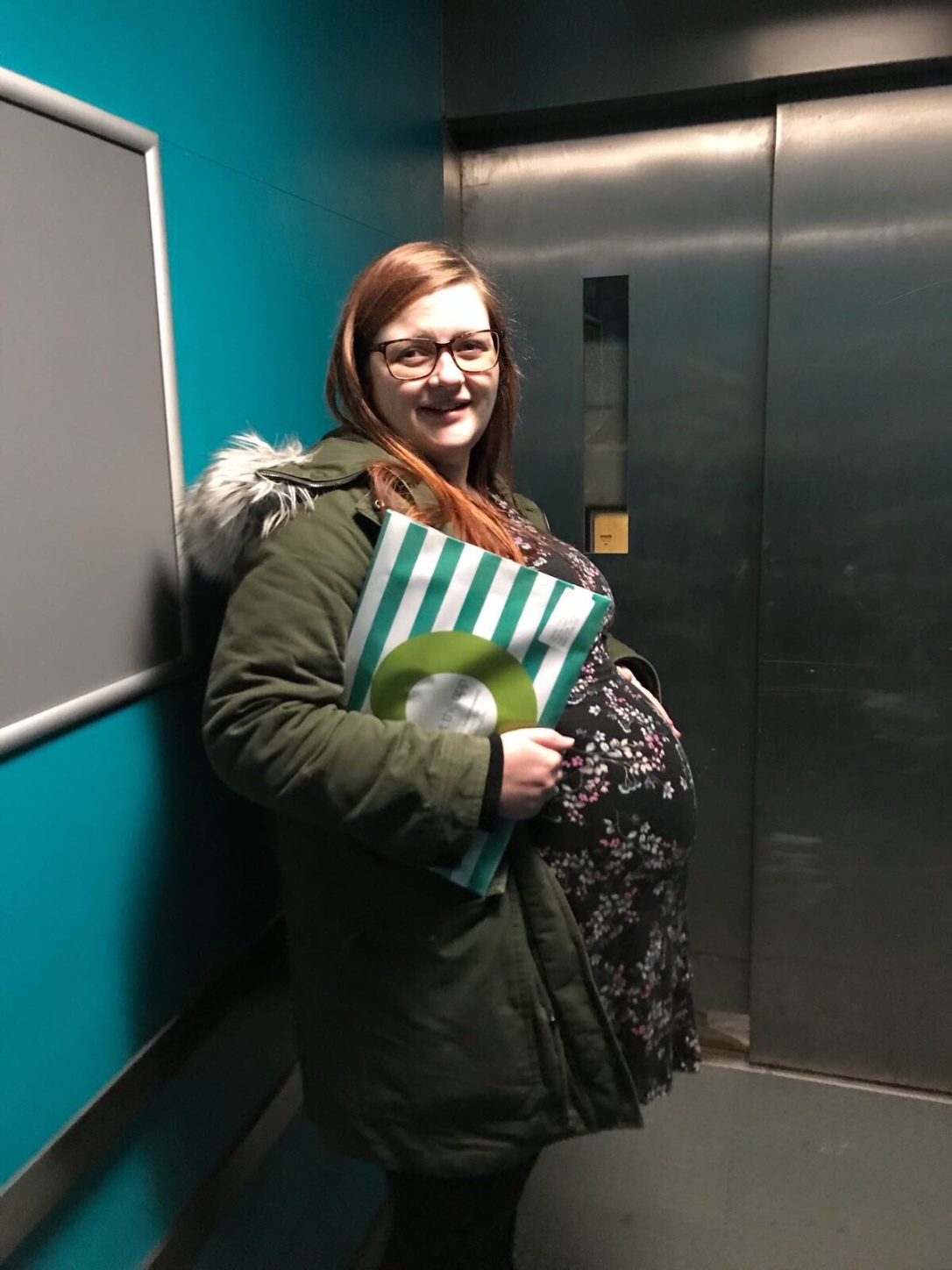 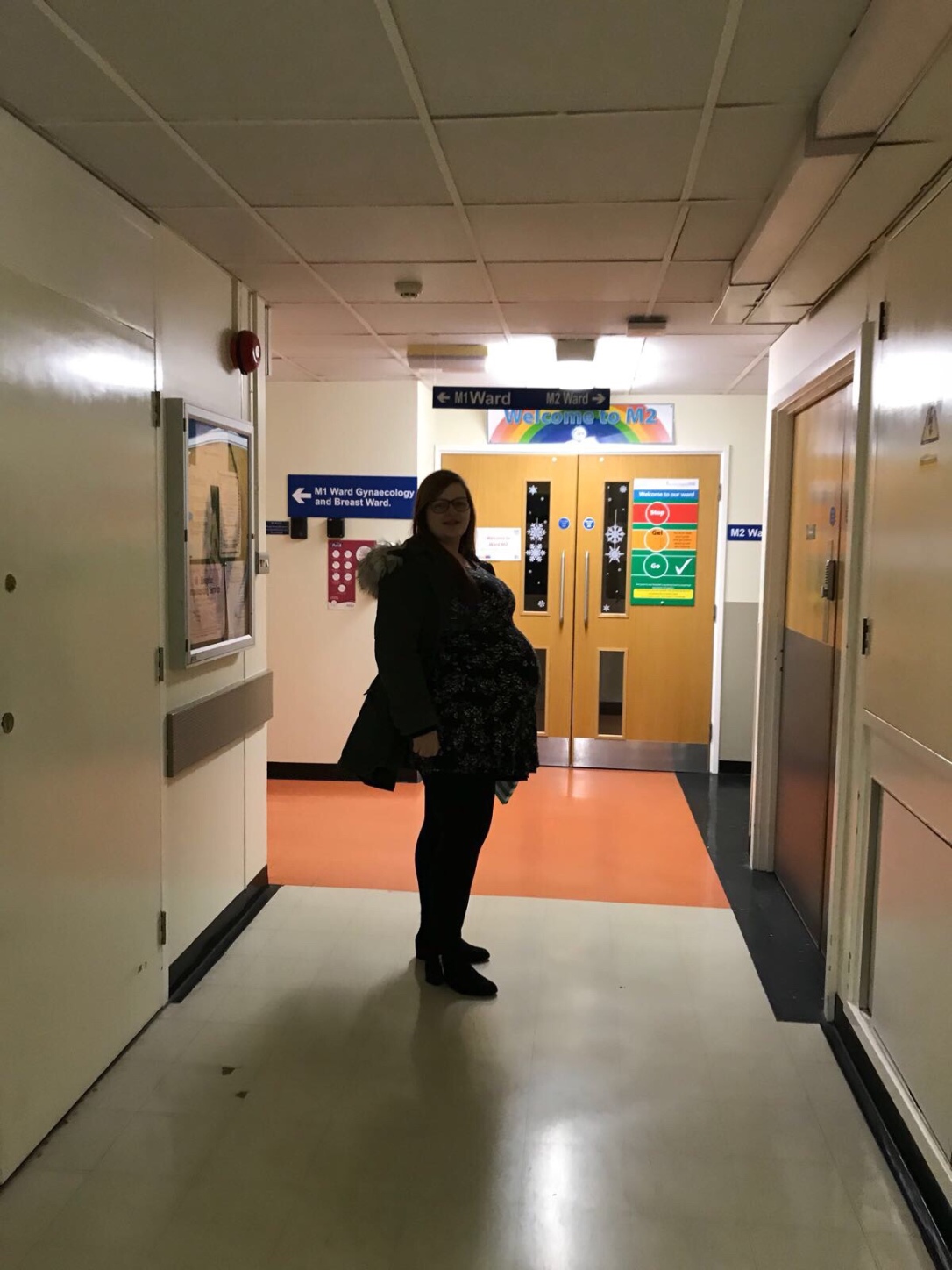 So then it was just a waiting game. I was on a small ward with 4 other women who all were having c-sections that day. Watching them get wheeled out, then wheeled back in with their babies was making me more nervous, as I knew it was nearly my time. I was with the babies father and our mums came to visit which was really nice, and helped me relax. 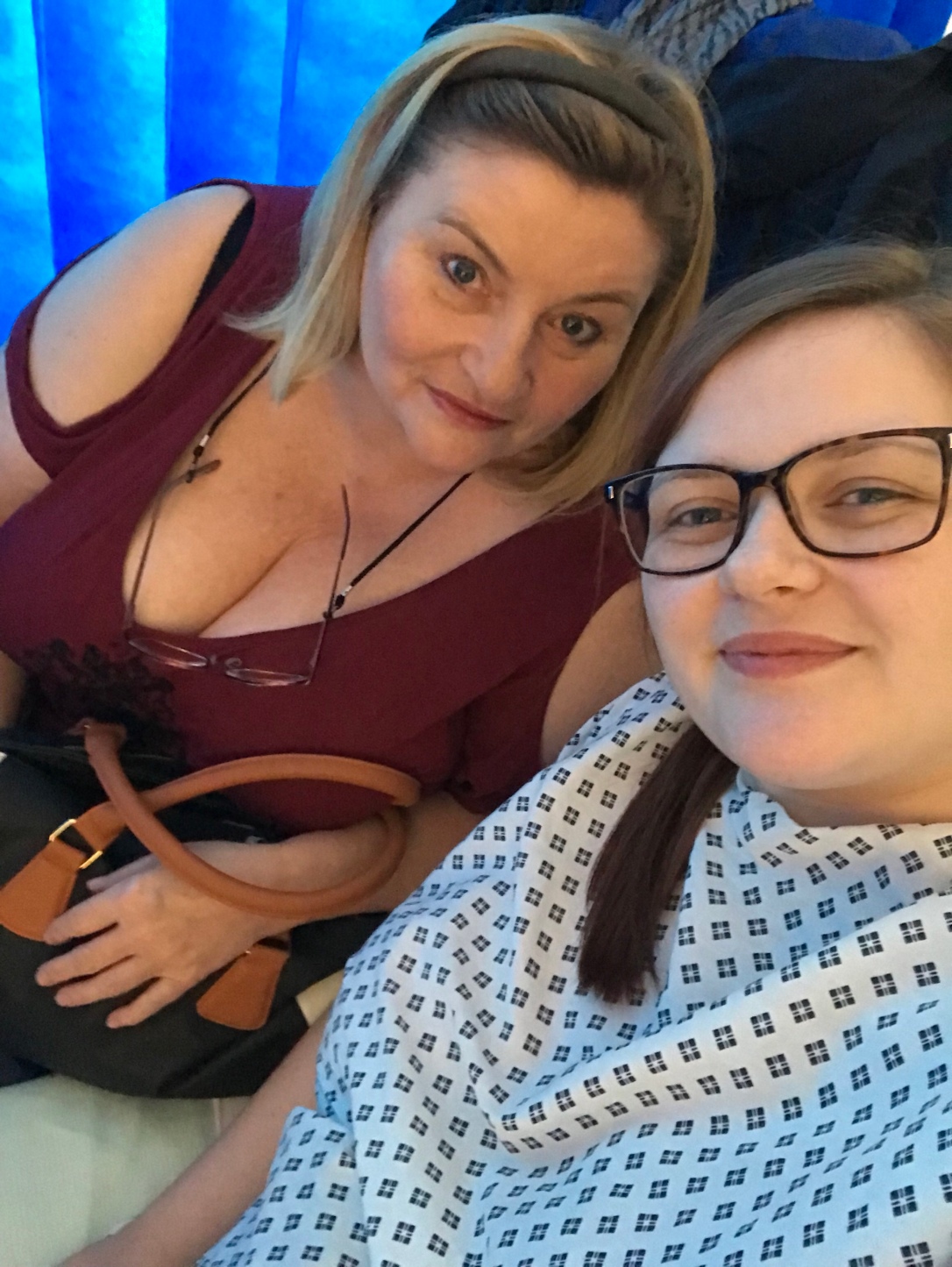 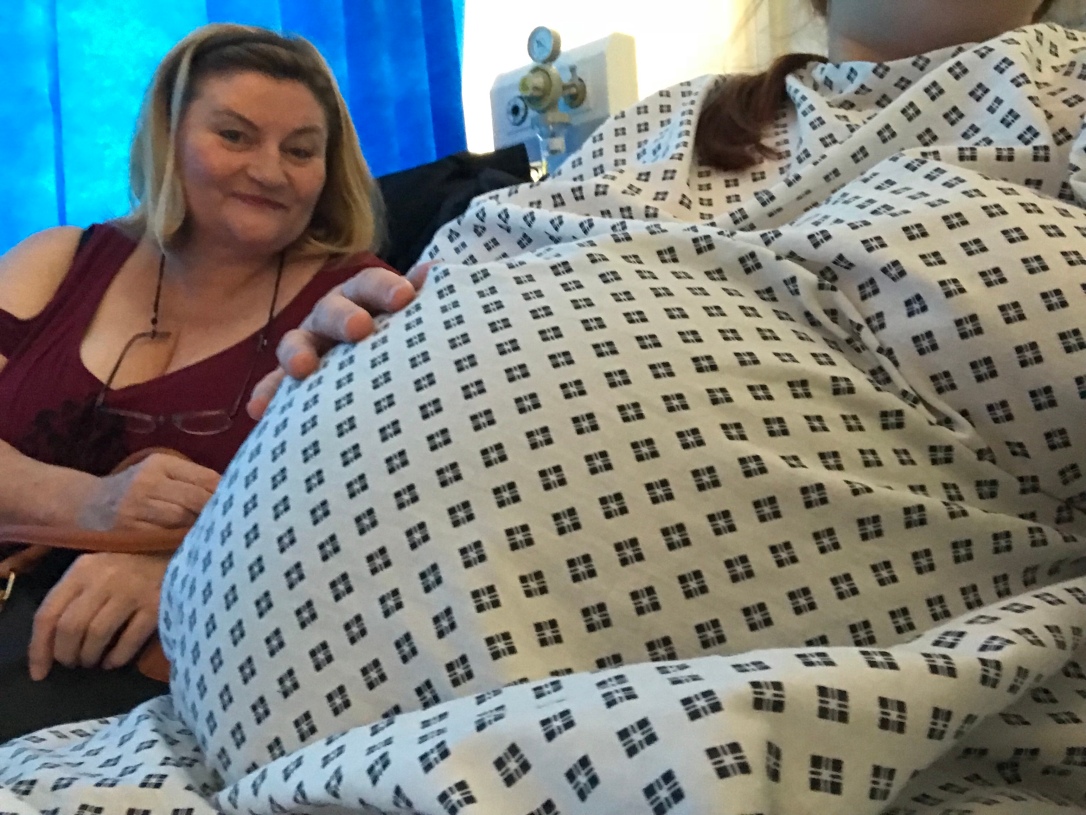 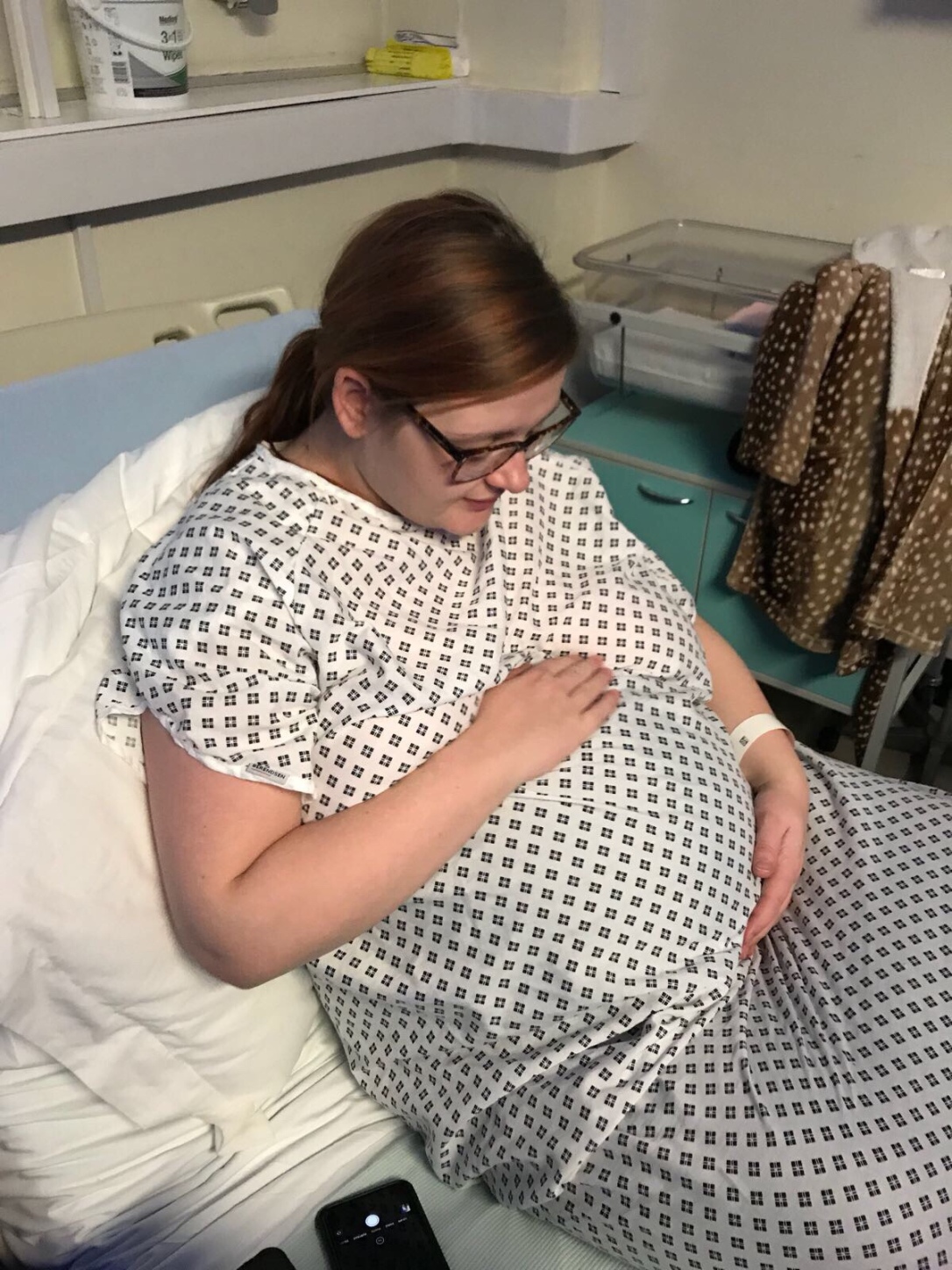 My section kept getting pushed back and now I’d gone over 12 hours with no food or water and all I wanted was a drink! But at 3pm I finally got called down! I took my own pillow to hospital, so I had some comfort, as hospital pillows aren’t the best, and I took it down to theatre with me. Now the nerves really kicked in! 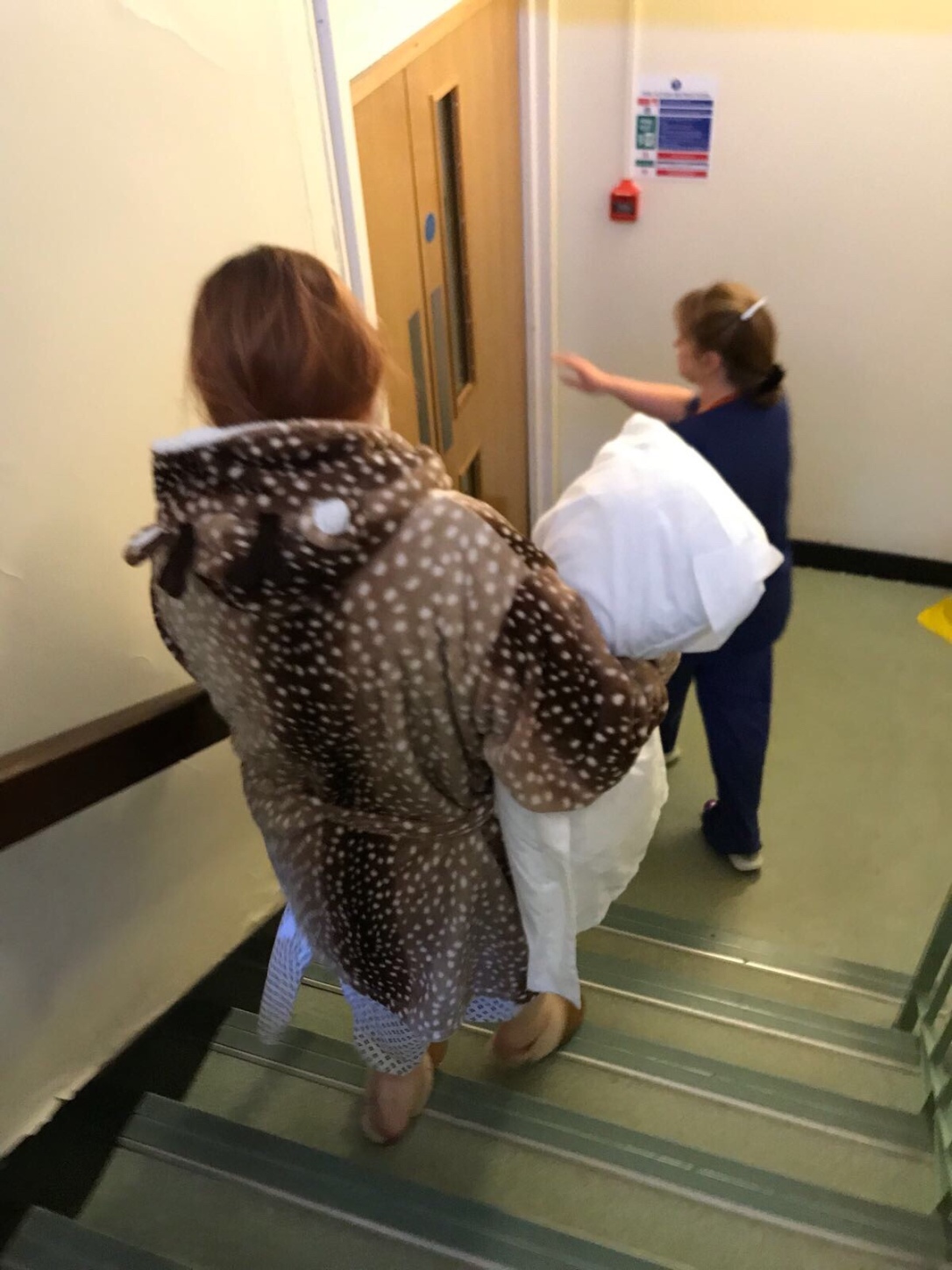 I wanted to walk to theatre and their dad really helped to try and calm my nerves. I remember sitting outside the theatre and the midwife was also trying to calm me down and while their dad went to go into his scrubs, I was taken in to get prepared.

I’ve never had any type of surgery before and I just remember how bright and white it was – and how there were loads of people and the bed set up in the middle of the room. This was it! 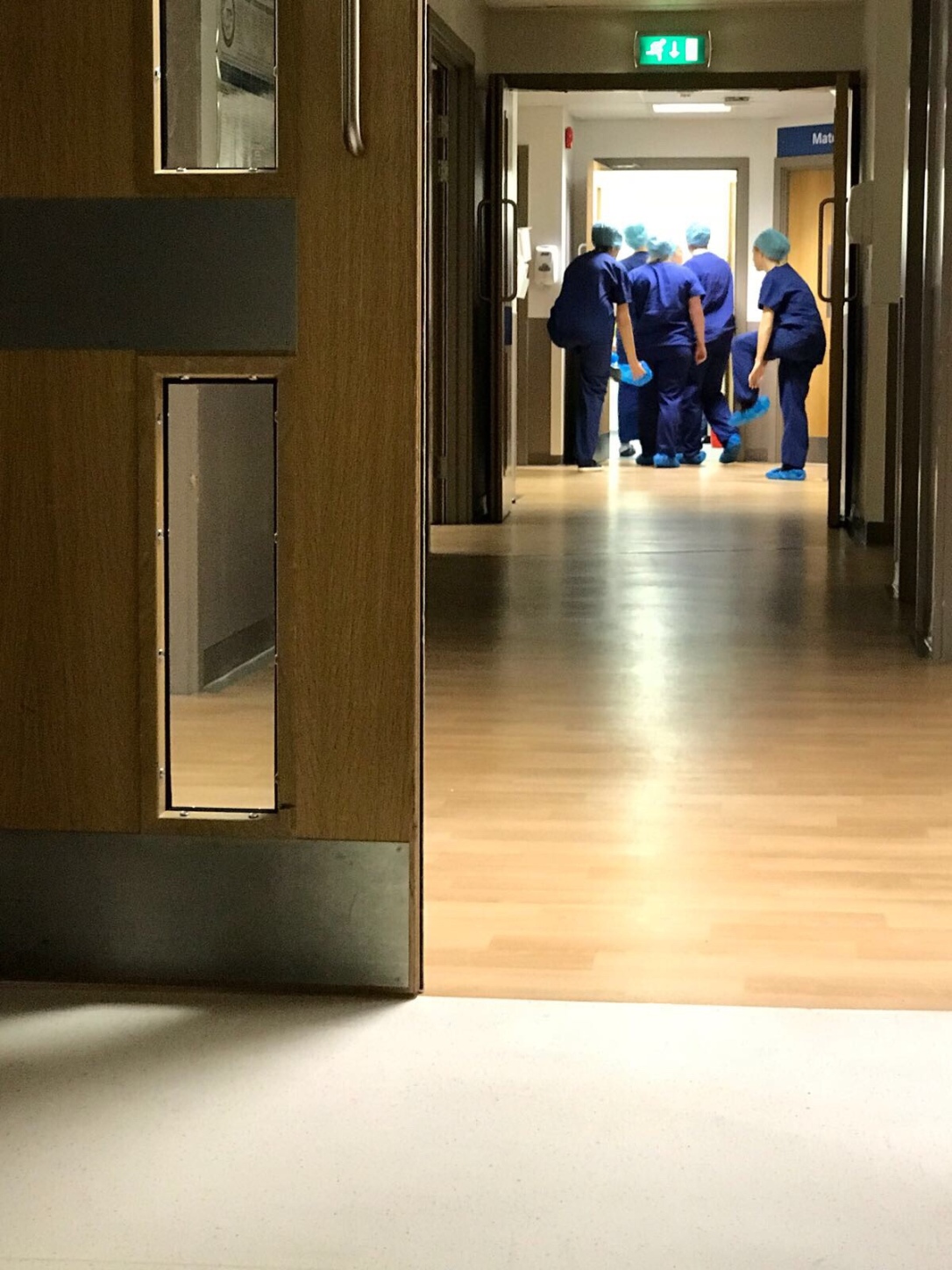 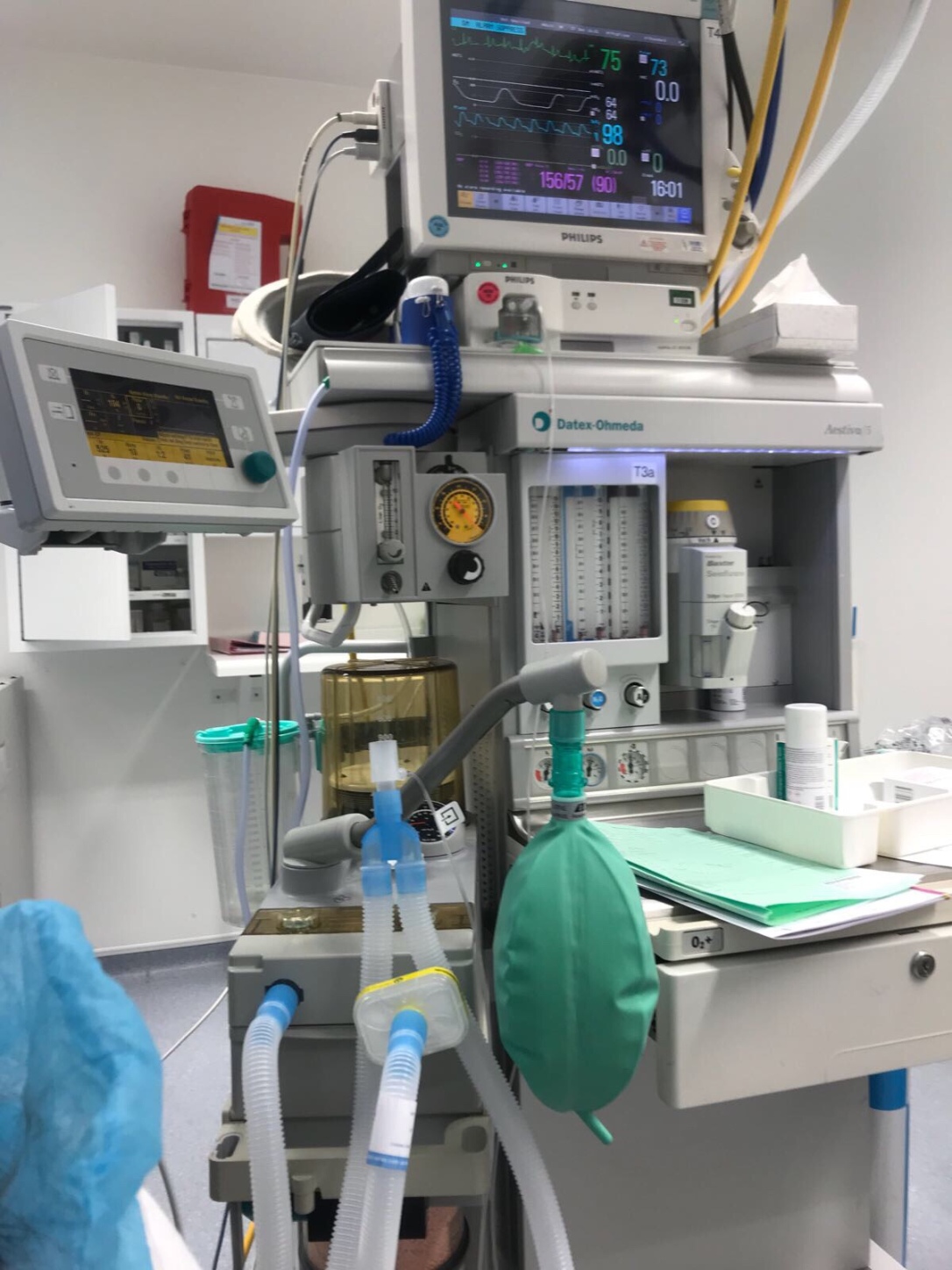 There were 19 amazing NHS staff in there for me. A team looking after me and three teams from NICU for each baby.

I was now sat on the edge of the bed, wearing just a hospital gown, crying. A midwife crouched in front of me holding my hands. I was more nervous for the spinal block than anything! The anaesthetist had such a calming voice and I had to try and stay still and relax while he administered the drug. It was such a strange feeling! When I was lay on the bed afterwards, he sprayed a cold spray on my arm and then when he sprayed it on my lower half, I couldn’t feel a thing!

Once my catheter was inserted, I was all prepped!

The babies dad kept talking to me and making me laugh, so I would forget about my nerves.

“Ok, so the first one will be out in a few minutes.”

This was it. I was about to become a mum to triplets!!

It all happened so quickly. 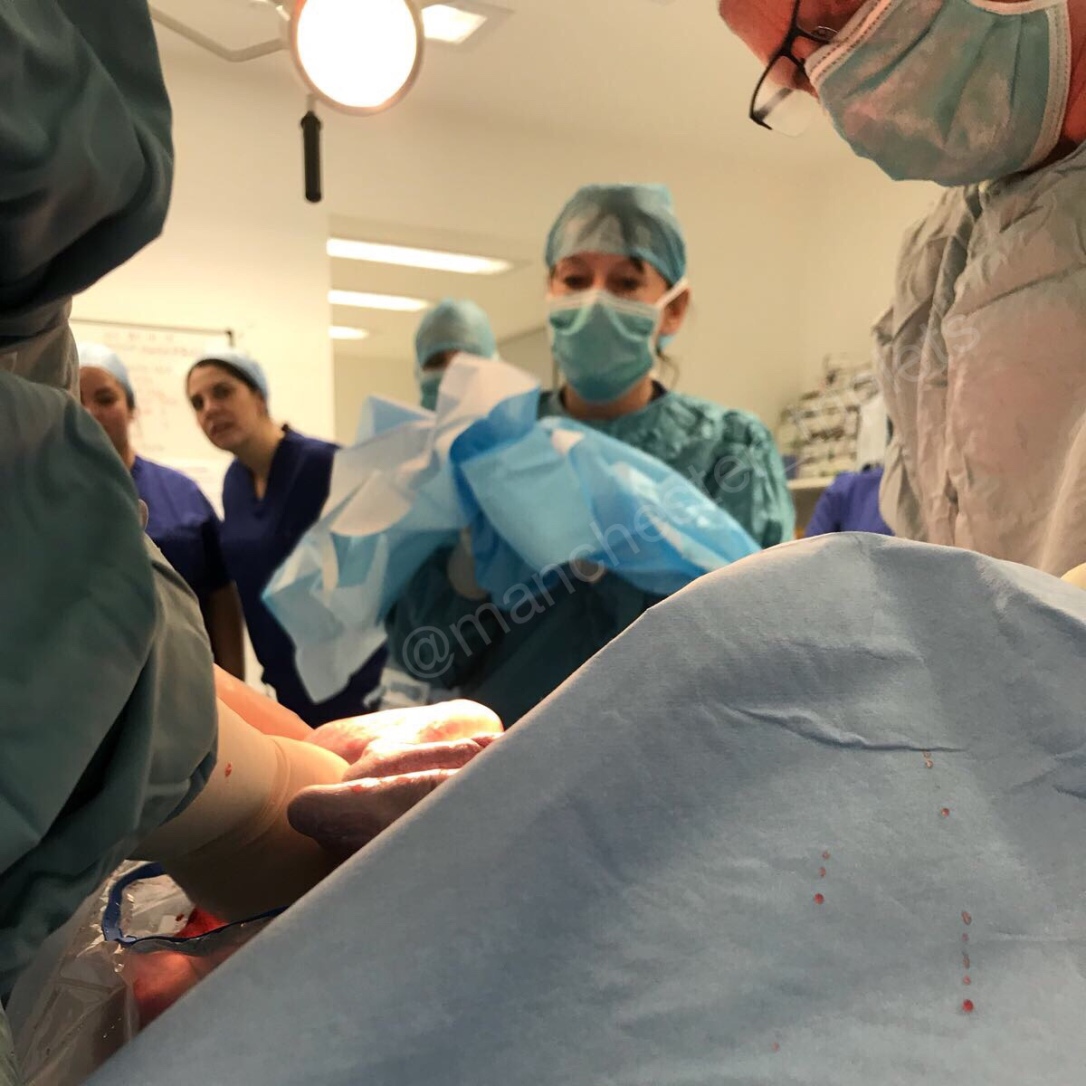 No sound, but they brought Joshua round to me so I could quickly see his little face. 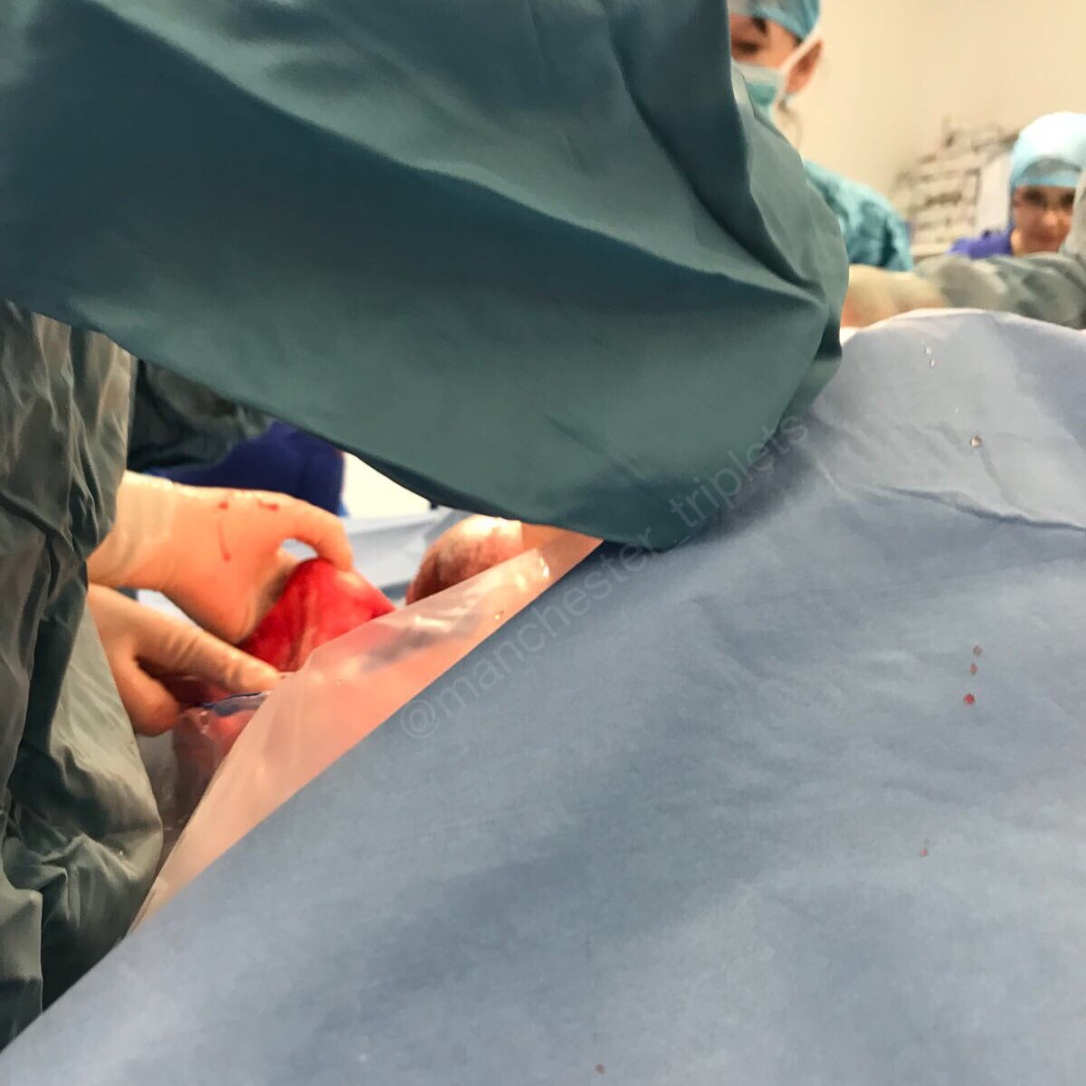 Oliver was then brought round to me and straight away I could tell they weren’t identical! Again, no sound, and now I was getting worried. “Girl!” 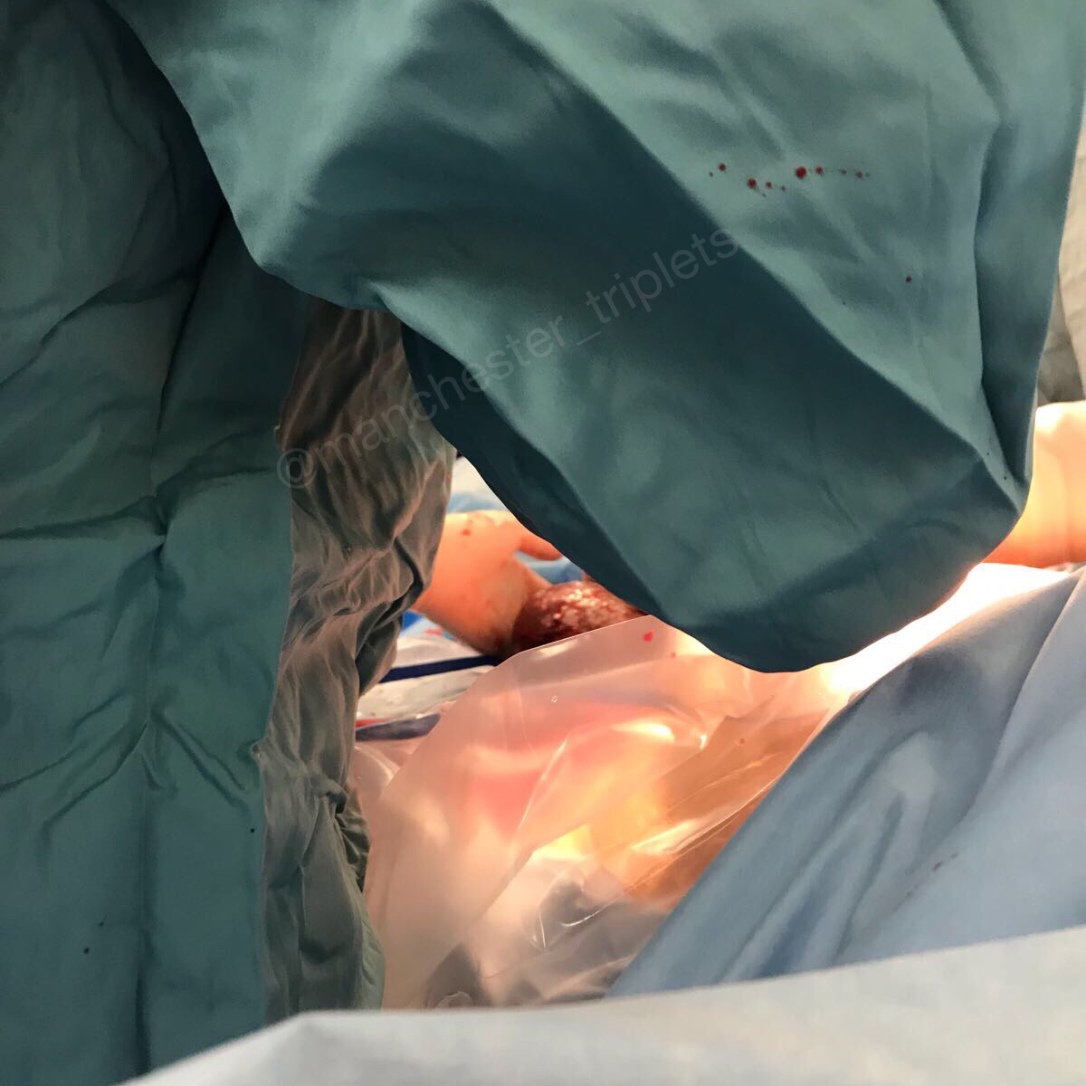 Mila came into the world screaming, but then it went quiet. She didn’t get brought round to see me.

“What’s happening? Why can’t I see my daughter?”

She needed help to breathe, as did my beautiful boys and after what seemed a life time, I was told they were all ok but needed to go straight to NICU. Their dad was able to go and see each of them and even cut their cord. He was absolutely beaming and crying. I was crying. When the babies left theatre he came and hugged me a gave me a kiss. I was getting patched up and I looked over the blue sheeting and was so shocked to not see a huge bump anymore! I thought it would stay similar size, but it had gone down loads. From going into theatre, to coming out, I had lost about two stone!

I asked to see my placentas when they were bagged up and they were huge! I had three placentas and three sacs, so no wonder my stomach went down quite a bit.

I got wheeled out to a recovery room so the anaesthetic could wear off and all I wanted was a drink of water. BD went to see our mums and tell them the good news and I was finally given water. 16 hours without, I was absolutely gasping! Word of warning though – don’t guzzle down loads of water when you haven’t had any for ages and have an empty stomach!

Just after 5.30pm I was able to meet my babies. They wheeled me into NICU in my hospital bed. I just couldn’t believe this was all real. They were so tiny and had tubes and breathing apparatus on them. I met Joshua first and I took in every inch of him, where later I would recognise him by his toes, I knew him that much. Joshua weighed 4lb 4oz. 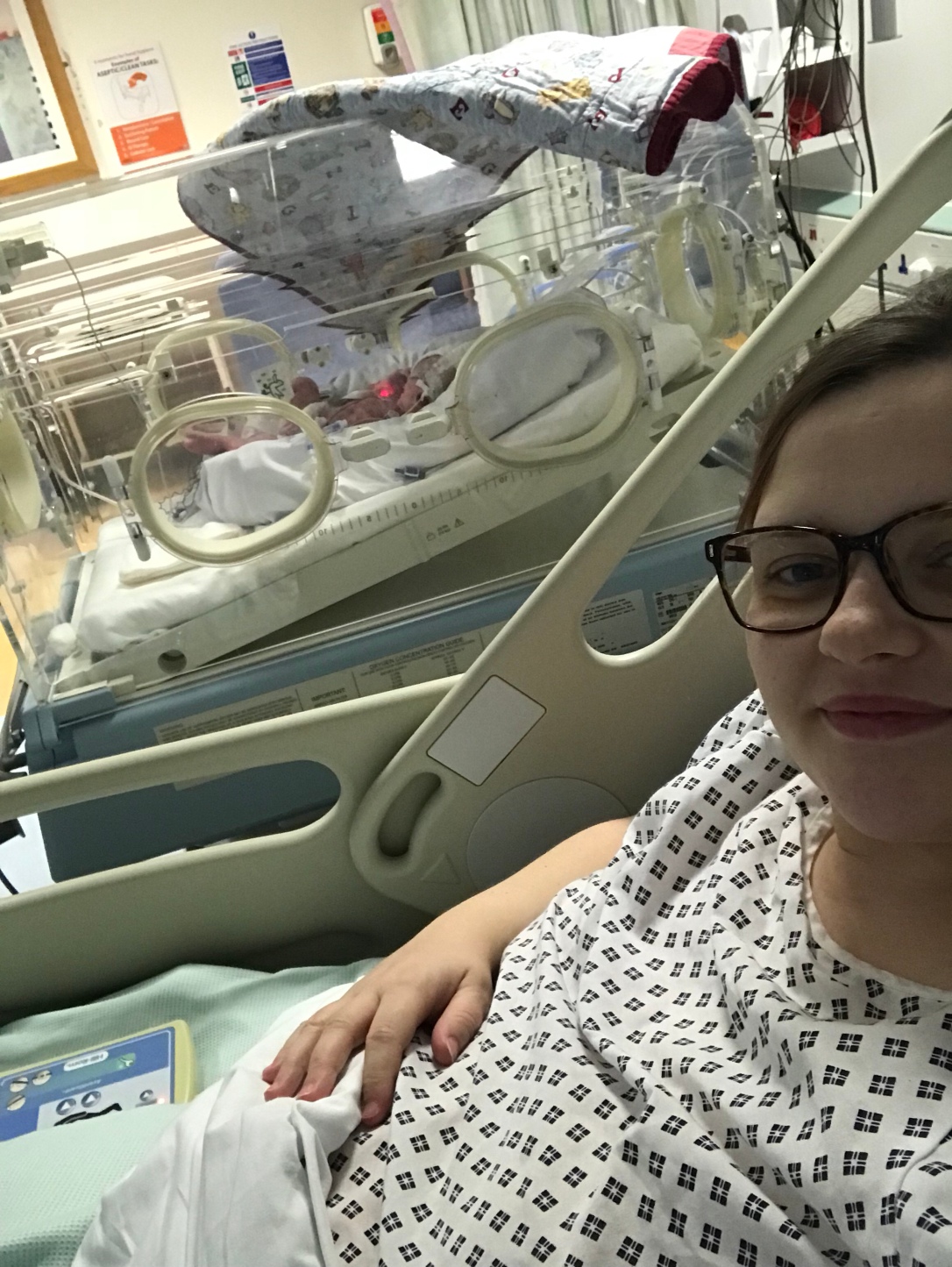 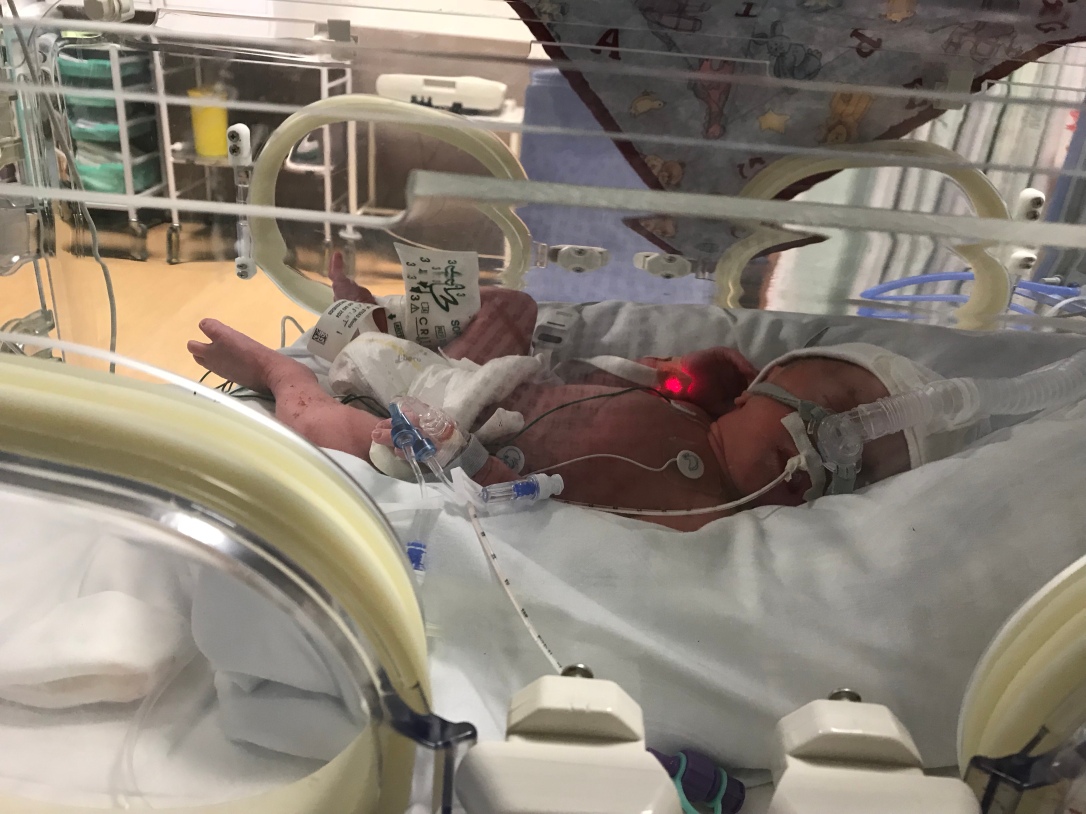 I then met Oliver. He was so tiny and just perfect. It was so hard not to be able to touch him or hold him. Oliver weighed 4lb 4oz. 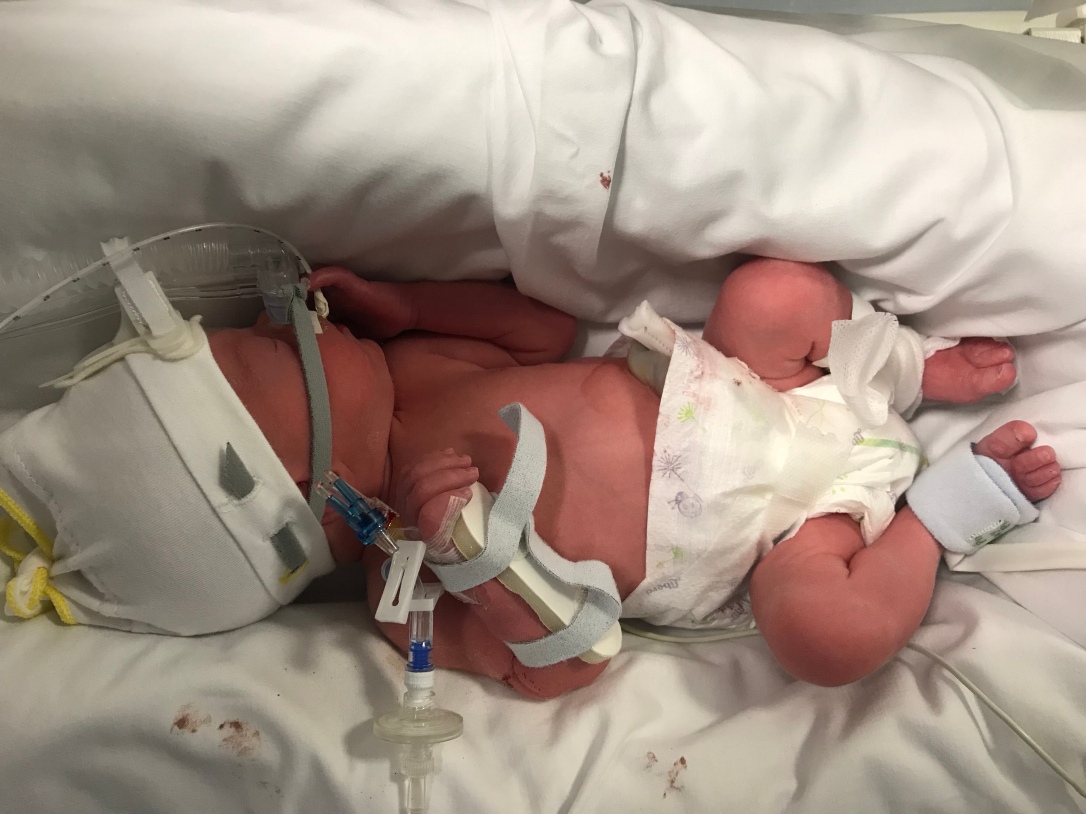 Then I saw Mila for the first time. My beautiful girl. I wanted to see her face properly as I hadn’t seen her in theatre and I remember I just wanted to wipe her mouth and I wasn’t sure if I was allowed! So hard to know what to do in NICU. I just wanted my babies and it was hard to look at them through the incubator. Mila weighed 4lb 7oz. 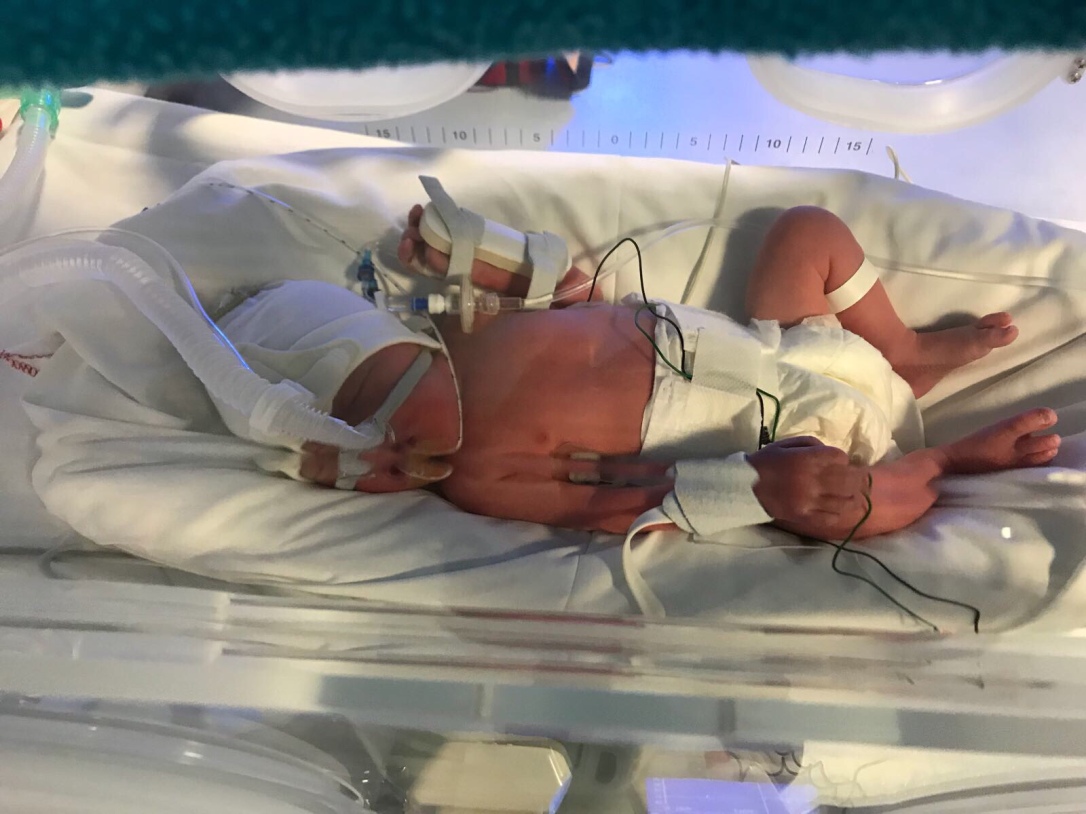 I then had to go back up to the ward and it was hard to go back and see all the other mums with their babies and I couldn’t have mine with me. I was given the most amazing jam on toast I’ve ever tasted, but then I threw up all over!

I think I slept, but I can’t remember, all I know is at 2am I was awake and itching to see my babies. I still couldn’t really walk and had my catheter still in, so a nurse wheeled me down to see them. There I was able to touch Joshua, where I touched his perfect little hand and stroked his leg. I didn’t want to leave. They looked so perfect.

It is so hard to have a baby (or babies in my case), yet then go back to a ward without yours and everyone else has theirs. I was just so glad they were healthy. I tried to express that night but that was such a struggle. Sat in bed, with the curtains wrapped around to give me some privacy. Over two hours squeezing my nipples and just getting upset nothing much was coming. But that’s a story for a later date.